Gluten: What’s Is It And Why Do People Avoid It? 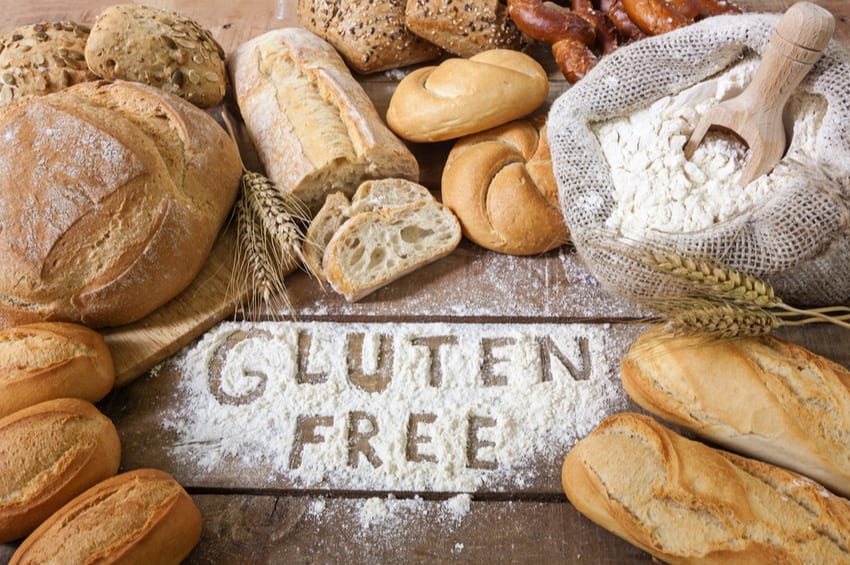 Your cousin and your other friend are now gluten-free, and you see the signs dotted around everywhere, from your local grocery store to restaurant menus and food magazines. The gluten-free food industry grossed over $15 billion in sales in 2016, highlighting the rising awareness of gluten intolerance [1].

So, what’s the deal with gluten? Why are some people gluten-free and can you also be keto? 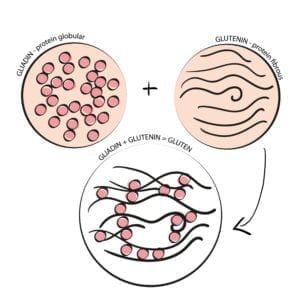 Gluten refers to a family of proteins called prolamins that are naturally present in cereal grains like barley, rye, and wheat [2]. Glutenins and gliadins are the prolamins found in wheat, secalins are found in rye, and hordeins are from barley [3].

The gluten family of proteins (prolamins) provides various practical culinary benefits, such as the soft, chewy texture that’s characteristic of many gluten-containing, grain-based food products. Gluten proteins form a stretchy, elastic network when heated that can trap gas and allow for optimal leavening or rising and maintenance of moisture in pasta, bread, and similar products [4].

Due to these unique physical properties, gluten is frequently added to processed foods to improve texture and promote moisture retention [5,6].

Why Do Some People Avoid Gluten?

Some people with certain medical conditions, such as digestive disorders, autoimmune disease, or celiac disease, require a glutenless diet as part of the treatment protocol. Many people report that removing this protein from their diet improved various symptoms from headaches to arthritic pain. 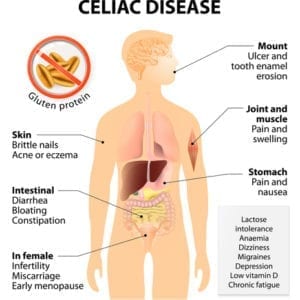 You might have heard of celiac disease — a serious autoimmune condition where the immune system attacks cells of the small intestine when gluten is ingested. Celiac disease is one of the most researched causes of gluten intolerance, and it’s estimated to affect around 1% of the global population.

The exact cause of celiac disease isn’t definitive, but there’s strong evidence of a genetic component. Medicinal treatments for celiac disease are being researched, but the most widely accepted and effective treatment is a strict glutenless diet. In more severe cases, celiac disease can be life-threatening.

Non-celiac gluten sensitivity (NCGS) refers to negative symptoms associated with gluten consumption that are resolved when gluten is eliminated from the diets in people who don’t test positive for wheat allergy or celiac disease [7].

More research is needed on NCGS, but current treatment involves adherence to a glutenless diet.

Some people have a wheat allergy, which is closely related to gluten intolerance but not exactly the same. Wheat allergies are an intolerance to the entire wheat food itself, not just the gluten protein. Someone with a wheat allergy must avoid wheat but can still consume gluten from non-wheat sources, such as rye or barley [8]. 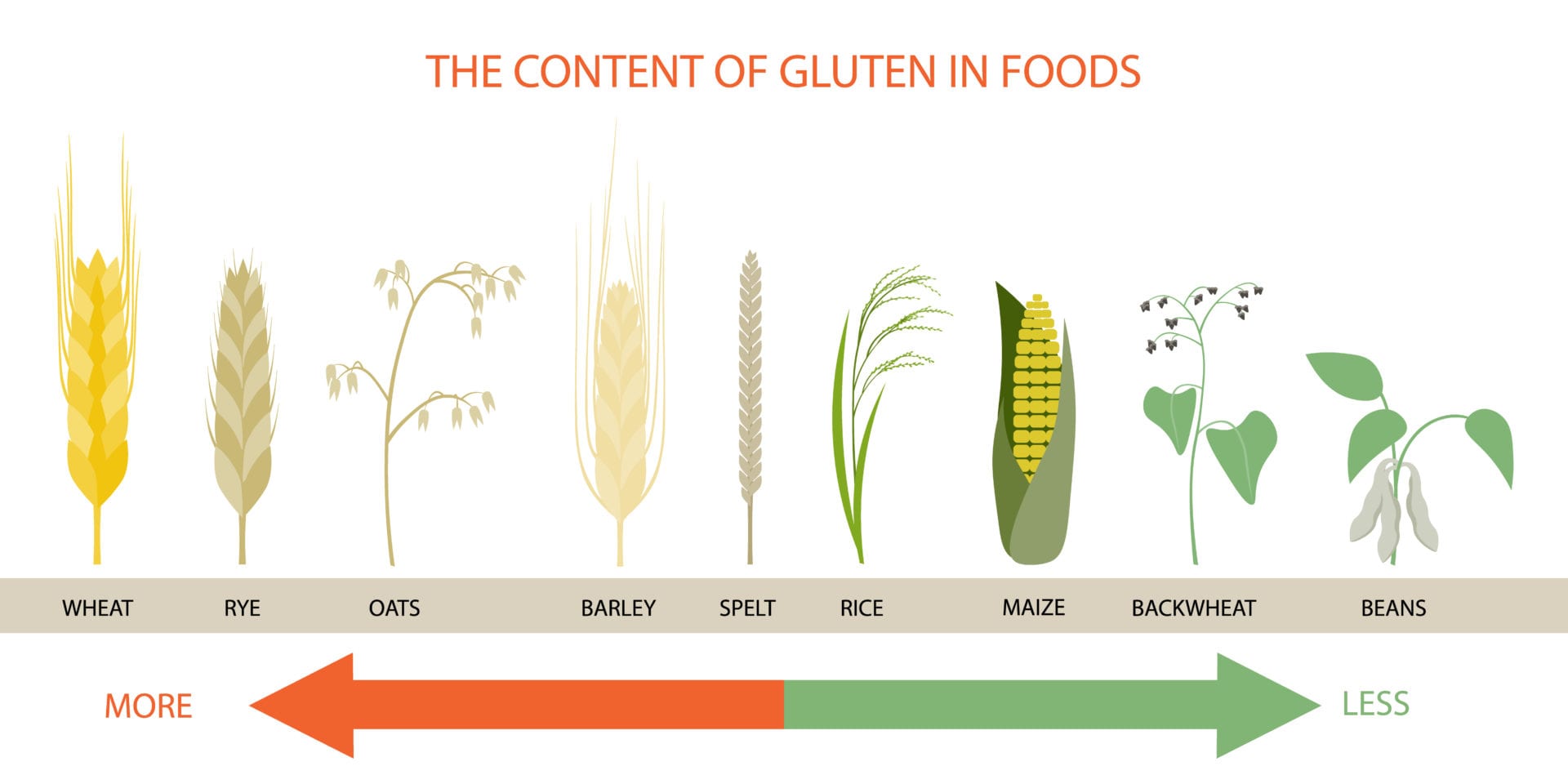 Most people with a wheat allergy follow a mostly glutenless diet because the two ingredients are so closely linked and present in the same foods.

Some health experts believe the increase in people with issues with gluten might be in part due to modern farming practices, such as the spraying of pesticides and chemicals and the genetic modification of foods like wheat. Wheat is one of the most commonly genetically modified foods. To avoid or limit these problems, when affordable and available, choose food products that have organic and non-GMO (non-genetically modified) on the label.

What are the Symptoms of Gluten Intolerance? 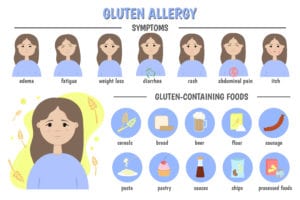 Symptoms of gluten intolerance vary but can include: [9]

The difficulty with gluten is that it might take one-to-three days for you to notice symptoms. For example, you might eat gluten on Monday and have a headache or fatigue on Wednesday, and you probably won’t connect the dots and associate the two.

If you believe you have gluten intolerance, you should speak to your doctor or healthcare provider before making any dietary changes. Some testing procedures for gluten-related conditions might provide inaccurate results if you’ve already eliminated gluten from your diet [10].

Some symptoms that might seem like gluten intolerance might actually be a reaction to something else, so it’s best to work with a medical professional to make sure you’re on the right track with your digestive and general health. If you’re interested in a keto doctor, check out our handy keto doctor-finder tool!

You can find gluten in a range of natural and processed foods, such as:

Gluten is often used in food products as a thickener or stabilizer, so it might not always be clear whether a food contains gluten. Some commercial food operations also share preparation equipment and machinery with gluten-containing foods, which can lead to cross-contamination. Even if a food is inherently glutenless, it might be contaminated with gluten during processing if it’s made in a factory that also makes gluten-containing products.

If you’re following a strict 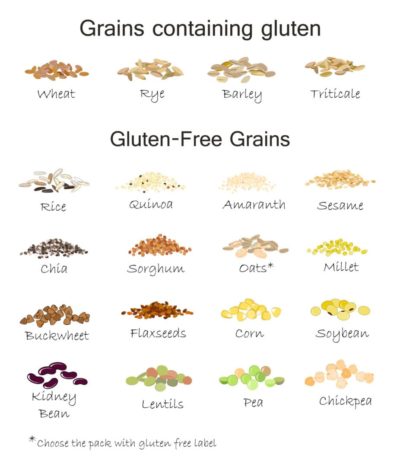 glutenless diet due to allergies and health or medical reasons and you’re unsure about a particular product’s status, it’s a good idea to check the package for a gluten-free label, contact the manufacturer, or just avoid the product to be safe.

Keep in mind that oats are also regularly transported and processed with equipment shared with wheat, leading to widespread contamination of oats, even if it isn’t mentioned on the label. It should be easy to find oats that are labeled or certified gluten-free, but some experts claim there’s no such thing as glutenless oats due to contamination, so they should also be avoided [11].

It’s important to note that most grains, including oats, contain gluten-like proteins that are structurally similar. Some research suggests people with intolerances and allergies to gluten might also have issues with these other similar proteins and might benefit from avoiding or limiting all grains. This is similar to the paleolithic dietary approach, which avoids all beans and grains, and sometimes dairy [12].

What Does a Gluten-Free Label Mean?

Many government health authorities have introduced gluten-free food labeling regulations to help those who need to follow a glutenless diet. These labels do make eliminating gluten easier, but they’re not necessarily fool-proof.

In the United States, Canada, and the European Union, a product can have a gluten-free label as long as gluten makes up less than 20 parts per million (ppm) of the product. Meaning for every million parts of the food, up to 20 of them can be gluten [13,14]. The 20ppm threshold in the US was set due to some evidence suggesting most people with gluten intolerance are unlikely to have adverse reactions at this low level. Some countries have set the limit as low as 3ppm.

If you have serious issues with gluten, it might be wise to avoid all grain-based products or at least the specifically gluten-containing grains like wheat, barley, and rye. You might choose a paleo diet approach where you avoid foods like grains and beans for some time to see how you feel.

Remember, you can also use alternatives, and you can find countless mouthwatering, comforting glutenless keto recipes here at Ketogenic.com! Why not enjoy spicy air-fryer chicken nuggets made with pork rinds or banana pancakes made with almond or coconut flour?

When you think gluten, you probably think soft, doughy, buttery bread! You don’t have to miss out if you’re glutenless and keto; put your wellness first and enjoy a keto-approved glutenless bread!

Do You Avoid Gluten on Your Keto Diet?

Share your tips for following a glutenless ketogenic diet. Share your favorite keto recipes with other keto dieters!

6.     Mayo Clinic. Glute n-Free: What Does that Mean? Gl uten-free: What does that mean? – Mayo Clinic Health System