Plant Protein vs. Animal Protein for Muscle Growth and Performance 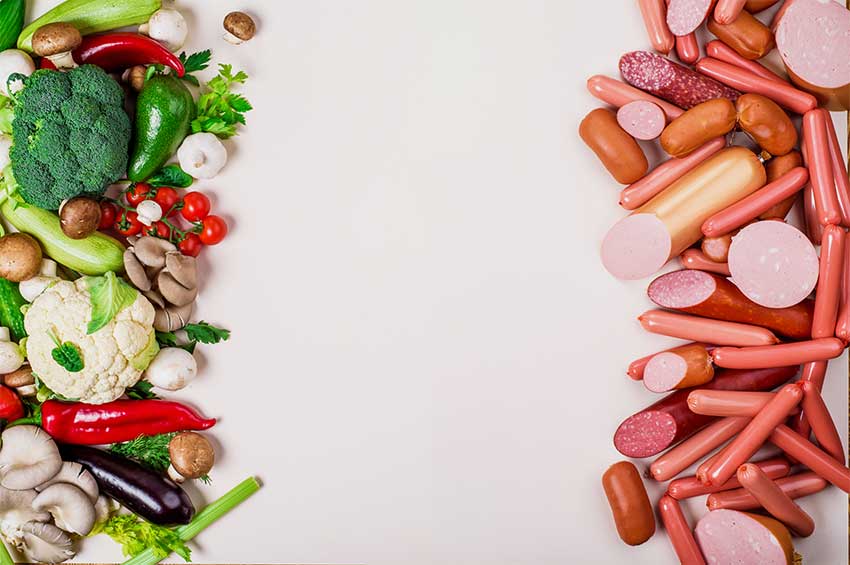 Well, here we are. The Game Changers documentary has gone live and the world is in shambles. The producers and director(s) did a fine job showing their side of the story, but the problem is that documentaries are typically designed to do just that: share one side of the story.

Since the documentary was mostly centered around athletic performance and building muscle, here’s a rebuttal from the other side of the matter that, frankly, isn’t nearly as biased about plant protein vs animal protein. You see, while this article is being presented on ketogenic.com, I am an outside contributor with no association with the ketogenic diet. I have no problem with the ketogenic diet, I just simply like doughnuts and pancakes too much to go keto.

With this in mind, let’s have an objective discussion on the scientific findings of the difference between plant and animal proteins and how they affect muscle growth and performance. Not potential health markers, not spirituality, and not climate change… just muscle and performance. All other factors are for arguments far outside the scope of this article.

Hopefully this preemptive statement does the trick in preventing tempers from flaring and accusations from flying, but it is 2019, so I’m sure someone will find a way around it. We can’t worry about that forever, though, so let’s get started.

It’s worth taking the time to compare protein sources because:

1) Sports and fitness in general are very popular activities that are both highly dependent on muscular strength and performance. [14]

2) Health, longevity, and quality of life are all greatly correlated with lean muscle and strength. [2]

3) Lean muscle mass is greatly predicated on the balance between muscle protein synthesis and protein breakdown. [29]

4) Different sources of protein can induce different effects on the rate of muscle protein synthesis. [29] 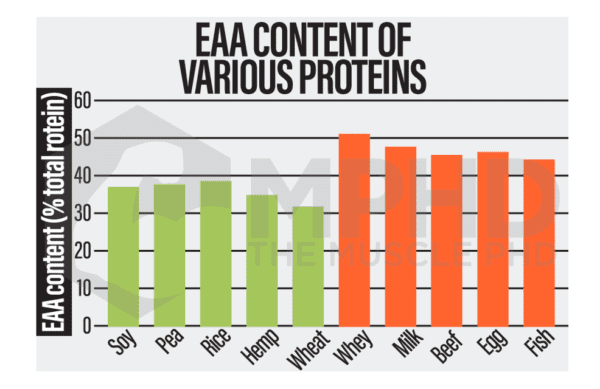 Leucine appears to be the most important EAA for stimulating muscle protein synthesis [11,21,28,29], so the majority of the comparisons between protein sources focuses on leucine content. Leucine and EAA content certainly play a role in how well a protein source can stimulate protein synthesis, but some other factors are involved as well, so which is better: plant protein vs animal protein? Let’s get into that next.

What about the overall quality of plant protein vs animal protein? Protein quality is highly related to EAA and leucine content and, up until recently, was measured by the PDCAAS scale, which stands for Protein Digestibility Corrected Amino Acid Score. However, this rating system has started to phase out and is being replaced by the DIAAS, which stands for the Dietary Indispensable Amino Acid Score [15]. 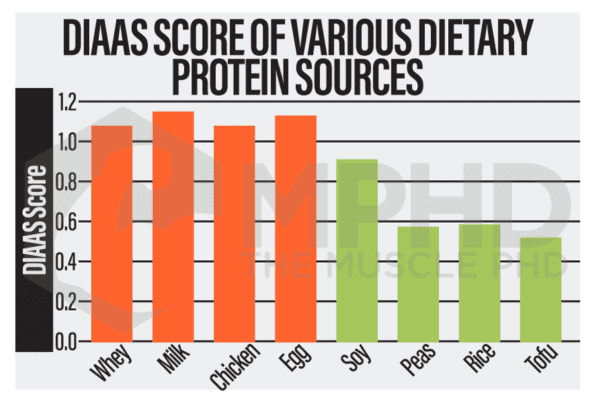 Both systems are used to measure how much of a certain protein source would be needed to avoid protein deficiency [29]. Avoiding deficiency certainly isn’t the same thing as optimizing lean mass gains, so these scores aren’t the most applicable right off the bat.

Both systems are great for assessing protein quality and bioavailability, but that doesn’t necessarily correlate with the anabolic potential of a protein source [29]. For example, soy and beef protein have similar PDCAAS scores, but beef has been shown to be more effective than soy protein at increasing protein synthesis levels [20,29].

From the charts in this section, it’s easy to see that animal-based proteins consistently have higher EAA contents and higher leucine contents. [29]

When protein kinetics are considered, research shows that plant proteins actually exhibit lower levels of digestibility when compared to animal proteins. [7] This is typically measured by the proportion of amino acids that are digested and absorbed and thus available in a form that can contribute to protein synthesis.

Animal proteins typically present with rates over 90% while plant proteins usually range between 45-80%. [7] However, isolated forms of plant protein, such as soy isolate or wheat gluten, often score above 90% as they are devoid of things like fiber or phytic acid which may affect digestibility. [7,29] 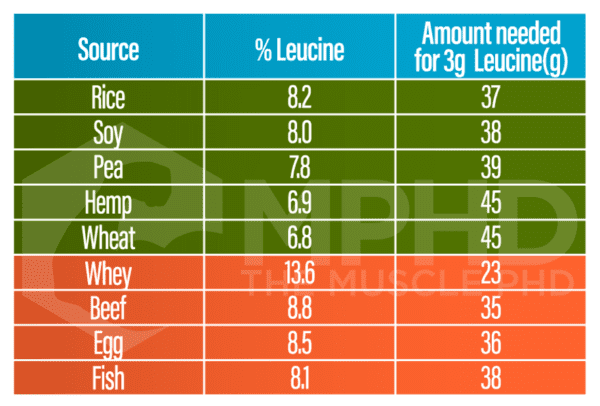 This can lead to an unfavorable amino acid mixture in the gut which increases the amount of amino acids that get shuttled to the liver, ultimately stimulating ureagenesis, or, the production of urea. [23] This theory has been somewhat confirmed in studies showing that soy protein causes a much greater increase in amino acid oxidation compared to milk protein when both are consumed in the same amount. [35]

All of the above can be summarized in the DIAAS comparison between various plant and animal protein sources, shown in the chart in the previous section. Animal proteins consistently score higher than plant proteins. [15,22]

So, we now have all of the background science and theories behind how animal and plant proteins might differ, let’s see how this plays out in the real world. In acute ingestion, soy protein does not increase protein synthesis to the same degree as whey protein [24], skim milk [33], or beef. [21]

Other forms of plant-based proteins don’t have nearly as much literature on their effects on protein synthesis as they’re not as readily available or common as soy. [29] Therefore any claims about the gains-effectiveness of a plant-based protein other than soy should be met with appropriate skepticism.

This acute increase in muscle protein synthesis has also been shown to affect gains in the long term. Milk proteins have been shown to be more effective for lean mass gains compared to soy proteins when both are taken in the same amount and same time frame. [10,31] 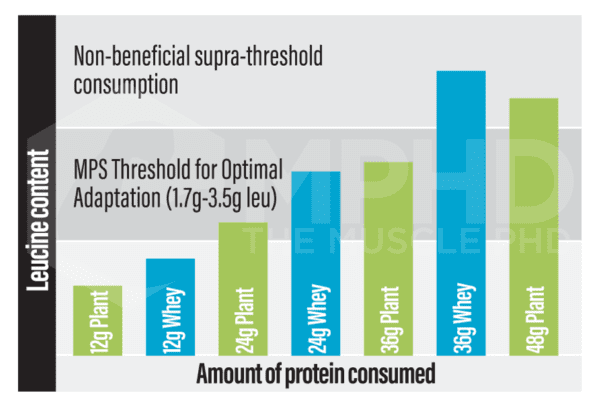 In addition, fish eating a plant protein diet compared to a normal fish chow diet actually experienced decreases in muscle fiber size [27]. However, studies do show that plant protein can be beneficial for growth, there’s just one caveat: you have to eat more!

Studies that provided higher amounts of both milk and plant proteins to subjects after a workout saw similar gains in lean mass over the long term between protein sources [6,11]. The reason for this is that both studies used at least 30g of plant-based protein. Since a higher amount of plant protein was used, the necessary leucine threshold of 2-3g was met [17,26].

If you reference the above chart concerning leucine content and protein sources, it’s easy to see that plants and whey protein could deliver similar amounts of leucine, you just have to take in more plant protein. Since the upper limit of the leucine threshold exists somewhere between 3-4g [11], taking in higher amounts of both will probably lead to similar increases in protein synthesis. Whey will provide leucine beyond the threshold which probably offers no additional benefits, while soy will be right in the wheelhouse of the threshold.

So really the takeaway here is this: animal proteins are more effective for promoting protein synthesis than plant proteins. But! All you have to do to even the playing field is eat greater amounts of plant protein.

The above leucine threshold seems necessary for driving muscle protein synthesis, so all one has to do is find the right amount of their desired protein source that lands them in the sweet spot of the leucine threshold. If this step isn’t taken, it’s very easy to under-consume protein during a plant-based diet which can reduce overall lean mass, strength, and quality of life [2].

If one does wish to subscribe to a plant-based diet while attempting to maximize muscle growth, creatine and beta-alanine supplementation should be considered as dietary provisions of both will be much lower [22,30]. In addition, vegan/vegetarian diets and the protein sources within their confines contain much higher amounts of antioxidants [30]. While antioxidants can improve endurance exercise performance, they can actually impair muscle growth [3].

Quite frankly, a plant-based diet is not optimal for muscle growth. Anyone trying to claim the opposite has some serious soul searching to do. But that doesn’t mean muscle growth is impossible! Take the information cited in this piece and use it to your advantage if you want to design a plant-based diet primed for muscle growth. Plan on eating at least 30g of plant protein at each meal to maximize muscle protein synthesis and try to avoid antioxidants around your workouts as much as possible. Taking digestive enzymes can also help improve the protein kinetics and digestibility of plant proteins [16].

Again, ethics and morality are far from the contents of this article. If you choose to lead a plant-based lifestyle, I completely respect that. That’s your choice and everyone else’s diet is their choice. However, it’s important to understand the objective and non-biased science behind plant-based diets and muscle growth. Growth can absolutely be achieved on a plant-based diet, however, specific steps must be taken to maximize growth – just like consuming a diet with both animal and plant sources. Optimizing your diet, no matter your primary food source, is a major component of making gains.

If you’re interested in a more in-depth discussion, check out the extensive review by van Vliet, Burd, and van Loon (2015) here. This review was of major assistance while drafting this article so credit is certainly due.

Note: One source in this piece was determined to potentially have a conflict of interest and/or bias [20]. However, this source is only used to support a single claim that aligns well with other claims throughout the article.