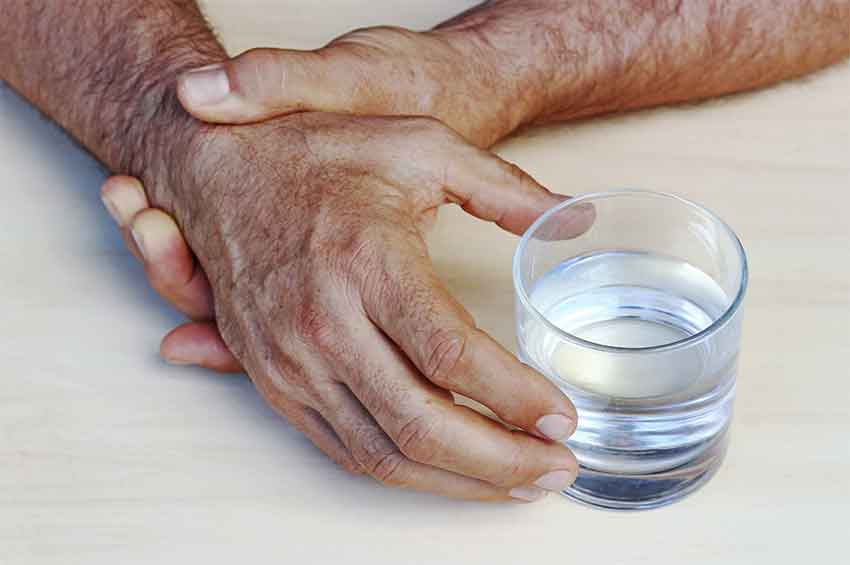 What is the Cause of Parkinson’s Disease?

Parkinson’s disease is caused by the death of neurons in an area of the midbrain known as the substantia nigra. These are dopamine-secreting neurons, meaning that their death will lead to reduced dopamine production. Dopamine is a vital neurotransmitter responsible for motor movement and reward-motivated behavior pathways. A lack of dopamine causes rigid movement, tremors, and may progress to difficulty with movement.

A hallmark of Parkinson’s disease is the of Lewy bodies in the brain. Lewy bodies are clumps of a protein called alpha-synuclein that do not break down and instead clog up areas of the brain.

What are the Symptoms of Parkinson’s Disease?

The telltale sign of Parkinson’s disease is tremors, which typically first begin in one hand. As the disease progresses through the nervous system, symptoms become more severe and may spread to other limbs. The most common symptoms include:

Who is at Risk for Parkinson’s Disease?

Parkinson’s disease is one of the more common neurodegenerative diseases, presenting in more than 200,000 US cases each year. Parkinson’s diseases typically begin to develop around the 6th decade of life. Risk factors include genetics and exposure to environmental toxins.

The genetic component of Parkinson’s disease has been heavily researched and with 18 key chromosomal loci being identified. Familial inheritance has been identified as an autosomal recessive mode of inheritance, meaning both parents have to have a PD gene for an individual to develop the disease.

Keto and Parkinson’s: Is the Ketogenic Diet Useful for Parkinson’s Disease?

Research suggests that damage to a specific mitochondrial complex may cause the death of dopaminergic neurons. This leads to impairments in energy production, causing neurons to starve. Since the uptake of ketone bodies utilize a completely different transport system, as compared to glucose, they may be able to provide neurons with an alternative fuel source.