The Whoosh Effect: Myth or Reality

Have you ever been stuck on a weight-loss plateau? It seems like it has been forever since you saw the scale move, but one fateful day you step on the scale and somehow you lost FIVE pounds overnight! At first, you are beyond excited. All of your hard work has finally paid off!

But then you may start to wonder… is it possible to lose that much fat so quickly? Was it just water weight? Is it a trick? Is your scale broken?

The short answer is no, it’s not a trick. You kicked some serious adipose butt after that weight-loss plateau and you should pat yourself on the back for all of your hard work, determination, and ability to say no to the slice of cake from your co-workers birthday last week.

So what happened? The rapid weight loss seen after a plateau is often termed a “whoosh” or “the whoosh effect”; however, the idea of what the “whoosh” really is has been wildly over-simplified. A simple search for the whoosh effect will lead you to the idea that fat cells lose fat, fill with water, and eventually collapse. This concept is actually false and has no scientific backing, although, the whoosh effect is still experienced by many.[1] 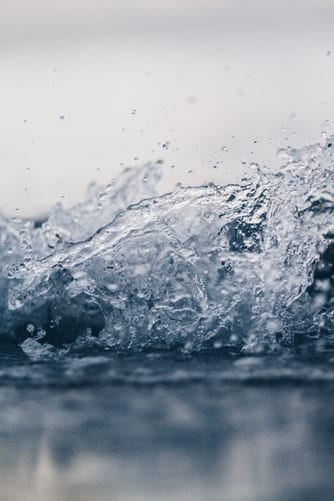 Adipocytes, or fat cells, are filled with triglycerides. These necessary fuel reserves keep your body functioning in times of starvation, but in excess amounts also lead to the dreaded muffin-top. When in a caloric deficit or state of increased energy expenditure, these triglycerides will be used for energy, however, the cell will not subsequently fill with water and “collapse.”[2] In fact, it has been proven that weight loss is not correlated with the number of adipocytes in the body.[3]

The exact mechanism of the whoosh is still unknown, but there are several valid hypotheses based on strong research. The suspected culprit is water retention caused by rapid changes in dietary habits, exercise, or water intake that occurs when people decide to “get healthy.”[4] Bioimpedance analysis measures body fat through electrical currents that travel through bodily water. Several published papers have noted an increase in fat mass right before a drastic decrease, possibly indicating a water balance/water retention issue.[5]

Your body is constantly trying to maintain a state of homeostasis and drastic changes will throw off that balance. It has been hypothesized that the whoosh could also be the result of ending homeostatic-related compensatory mechanisms.  Other theories include hormonal changes, especially in females near their time of the month, and changes in cortisol levels due to increased exercise or stress.[6][7][8]

“Weight loss does not lead to any discernible change in the number of adipocytes in adipose tissue.”
– MacLean, 2015[3]

Although scientifically we still do not know the cause of the whoosh, the phenomenon occurs frequently and the anecdotal evidence of thousands is hard to ignore.  So next time you are struggling with a plateau on the scale and want to give up, just remember you may have already lost the fat and a number dropping whoosh may be right around the corner.

6. Davidsen, L., Vistisen, B., & Astrup, A. (2007, December). Impact of the menstrual cycle on determinants of energy balance: A putative role in weight loss attempts. Retrieved from https://www.ncbi.nlm.nih.gov/pubmed/17684511