On a standard diet, carbohydrates are the primary fuel source for the human body, whereas, on the ketogenic diet, fat becomes the primary macronutrient. Carbohydrates are derived from various sources, such as grains, legumes (beans), corn, fruit, dairy, and vegetables. Not all sources are equal; carbohydrate sources can be divided into the following three categories: sugar, starch, and fiber.

Combining these sugar molecules can result in larger carbohydrates that vary in molecular makeup and mechanism of digestion. Before moving to the other two classes of carbohydrates, let’s further discuss the different structures that we see among carbs.

How Are Carbs Linked? 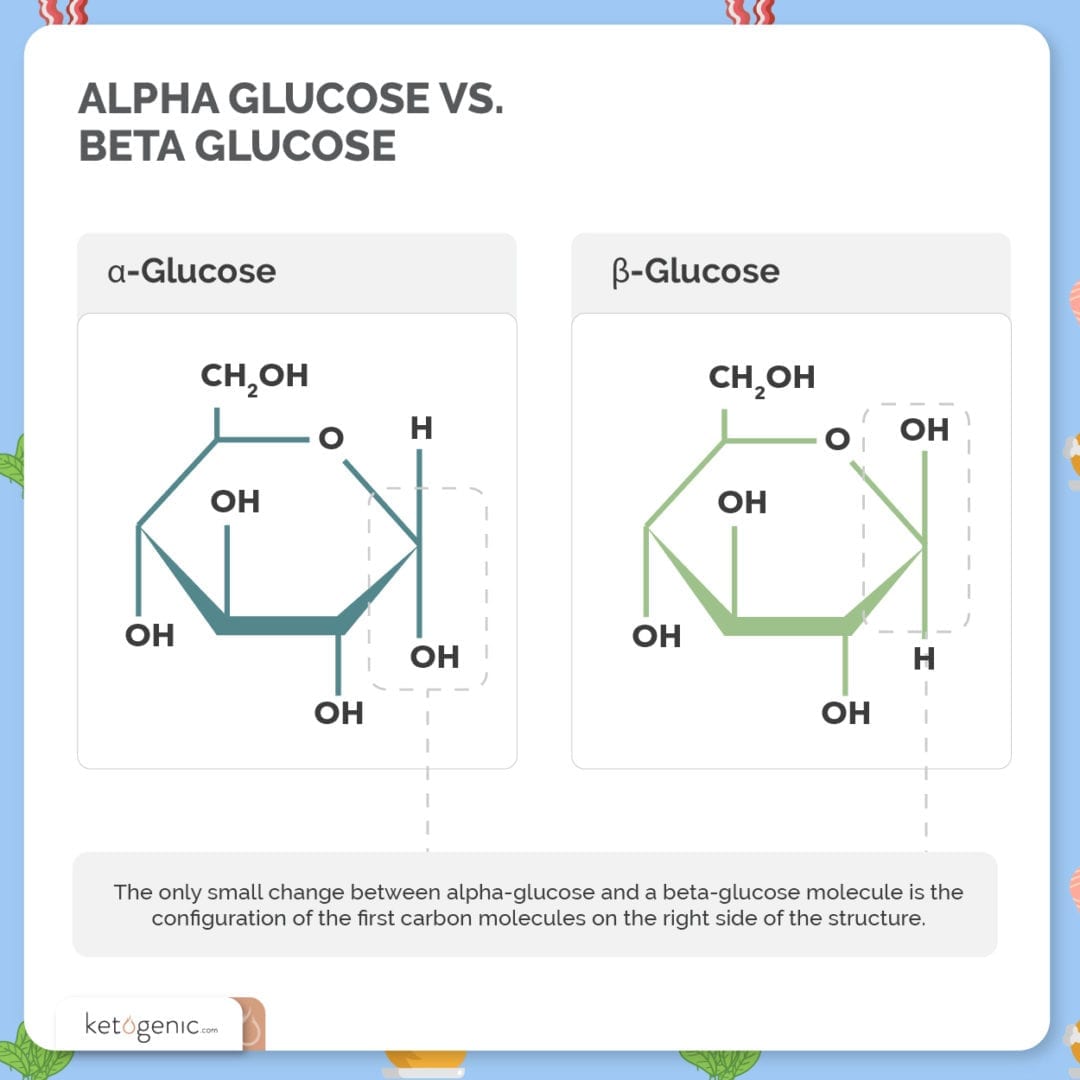 Carbohydrates can also be classified by the bonds that hold their sugar molecules together. Bonds called glycosidic bonds can join two sugar molecules together by linking one of the six carbon atoms on one sugar to one of the six carbon atoms on another sugar. The most common types of glycosidic bonds are alpha-1,4 and alpha-1,6. Below is an example of an isomalto-oligosaccharide (IMO) that contains both bonds. 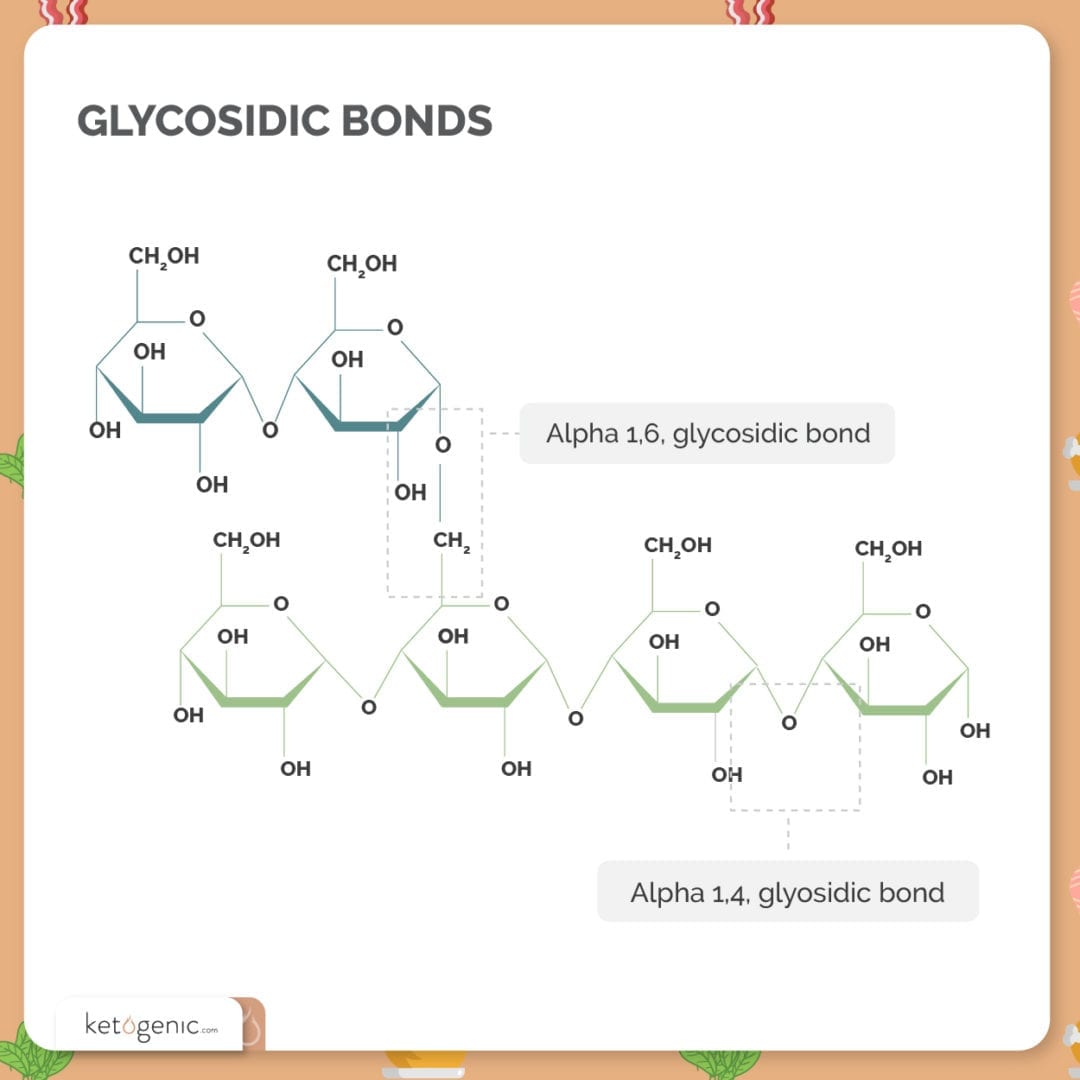 Carbohydrates, depending on their configuration, are broken down into glucose when they are digested. An increase in blood glucose stimulates the release of insulin from the pancreas. Insulin allows for the uptake of glucose into the cells of the body. This can be thought of as a lock and key mechanism, where insulin receptors are locked, and insulin is the key that can unlock the cell to release glucose. Some carbohydrates stimulate a quicker and more robust insulin response than others. This is where the glycemic index comes into play. The glycemic index is based on how rapidly carbohydrates raise blood sugar and thereby stimulate the release of insulin from the pancreas. On a scale of 0-100 the highest glycemic index of 100 is the rate at which pure glucose increases blood sugar. High glycemic carbohydrates are rapidly digested and converted into glucose, resulting in a rapid increase in blood glucose levels. Lower glycemic carbohydrates, due to their beta bonds and/or alpha-1,6 glycosidic bonds, result in a slower release of glucose. Glucose, once inside the cell, can either provide immediate energy or be stored.

The final carbohydrate source is fiber. Much discrepancy exists regarding what constitutes a fiber. For our purposes, we will use the following definition: plant material not digested by mammalian enzymes. It is the inability of fiber to be broken down that provides its unique characteristics and benefits. Fiber can be classified based on its linkage as well as by its physiological properties. Most fibers are made up of beta bonds, which if you recall are digestive-resistant. The physiological properties that classify fiber are soluble or insoluble. A possible fate of undigested carbohydrates is fermentation by gut bacteria, a process that leads to the production of short-chain fatty acids (acetate, propionate, and butyrate) and gasses (hydrogen, carbon dioxide, and methane) which can benefit the gut microbiome and provide energy. 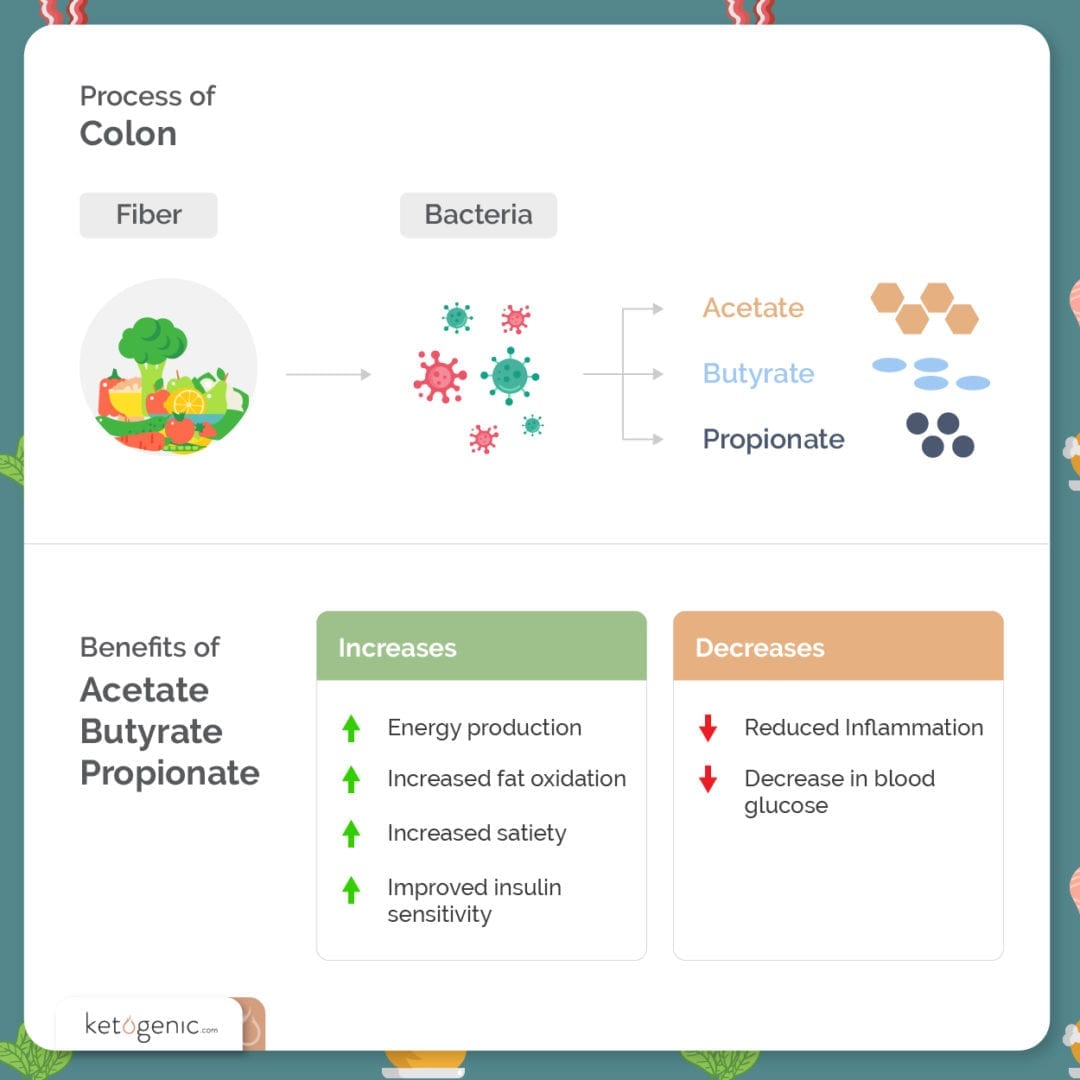 Resistant starches can provide an array of health benefits, including improved insulin sensitivity and blood glucose levels (3,4). Below is a list of additional potential benefits of resistant starch. 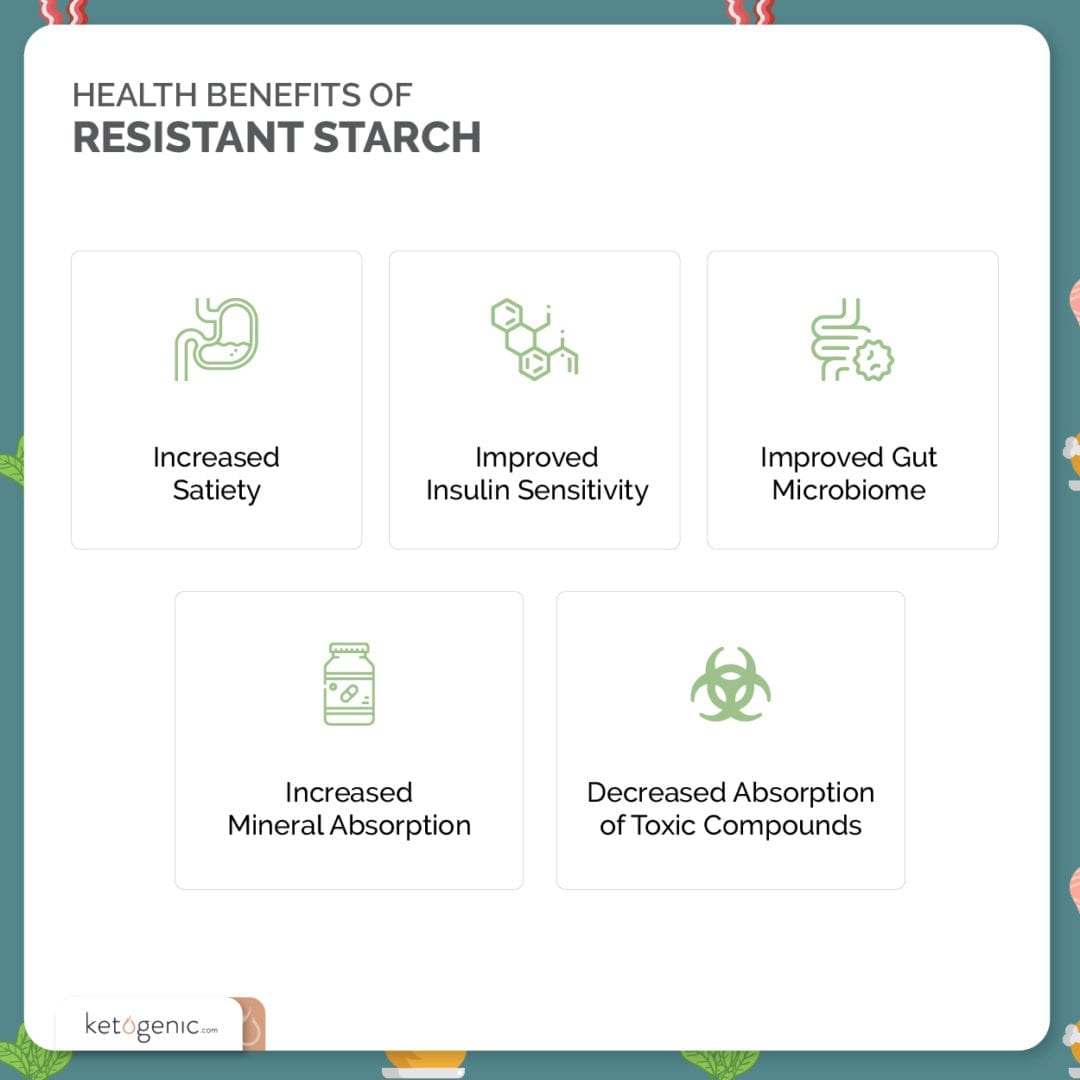 Certain carbohydrate sources should be avoided when ketogenic dieting, as their carbohydrate content per serving and/or glycemic index is too high for ketosis. In general, if the goal is to stay in ketosis, where the body is producing and utilizing ketones for energy, carbohydrate consumption should be kept at or below five percent of total calories. Within this five percent, the majority of the carbohydrate sources should be very high fiber, cruciferous vegetables. Sugar, fruit, milk, grains, legumes, and starchy vegetables (potato, yucca root, corn, etc.) generally cannot be consumed on a ketogenic diet. Vegetable sources such as broccoli, cauliflower, spinach, mushrooms, and kale can be consumed on a ketogenic diet.

Fiber can be incorporated into the diet via the consumption of cruciferous vegetables or supplementation. High-fiber protein bars are becoming common among low-carbohydrate dieters since the carbohydrates they contain theoretically should not elicit a glucose or insulin response, but this is only the case if the appropriate fiber is used.

IMOs, typically used in high-fiber protein bars, possess both 1,4 and 1,6 glycosidic bonds. This means that part of the molecule can be digested at the 1,4 bond, while the 1,6 bond is digestive-resistant. For this reason, IMOs are classified as fibers despite possessing some starch characteristics. Certain IMOs could be classified as resistant starch based on the inability of their glycosidic bonds to be broken. The digestive capability of the 1,4 bond allows this particular carbohydrate to elicit an insulin response, which may make soluble corn fiber a better option over IMOs. Soluble corn fiber is composed primarily of alpha 1,6 glycosidic bonds, making it highly digestive resistant, which in turn results in much lower blood glucose levels and subsequently a lower insulin response (5). 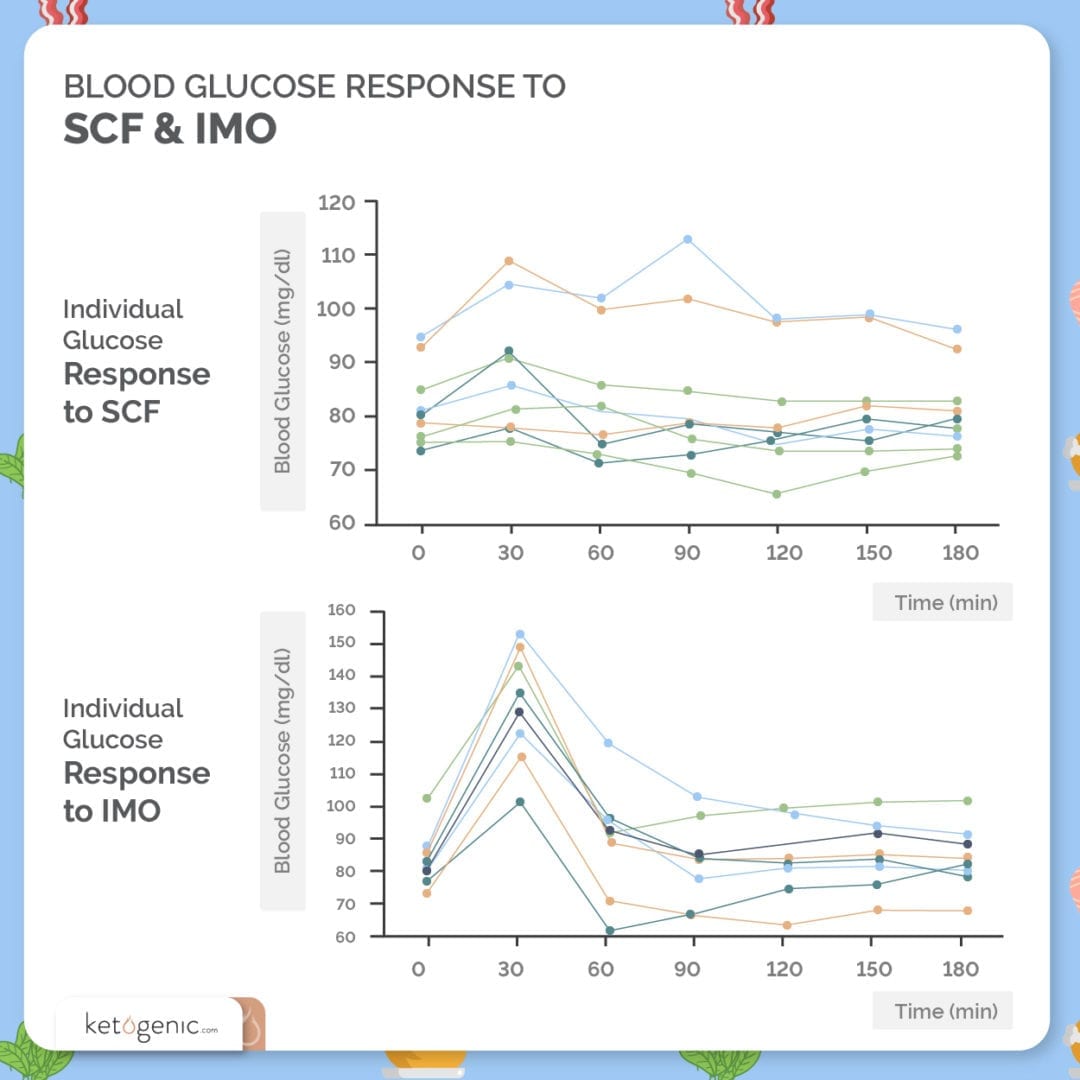