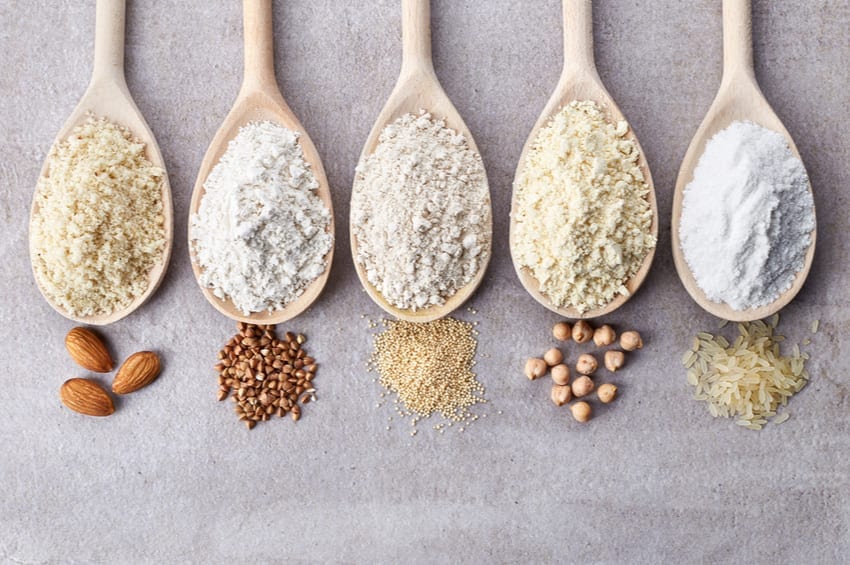 If you’re following a keto diet, you’re going to want to eat more than just meat. Here’s a look at the best flour alternatives for keto baking and recipes.

If you’ve been keto for a while, you know that grain-based flours are off the table because of their high carb, low fiber count. If you’ve recently started following a ketogenic food plan, you might feel at a loss for how, or why, you might want to look for keto flour options.

Flour from grains like wheat or sorghum is not keto-friendly because they’re high in carbs. Even gluten-free flours that aren’t grain-based can be ultra-high in carbs, like cassava, tapioca, and even cashew flour.

In order to not blow your macro ratios out of the water, you’re going to want to find keto-friendly flours to use when baking keto bread, making keto-friendly cakes or cookies or making fat-filled power bites.

Here’s a breakdown of several flours often used on the keto diet and their strong points.

There are several flour options you can use on a ketogenic diet. These four are the most commonly used.

Almond flour is made from turning whole almonds into meal, and in most cases, the flour contains just that one ingredient: almonds. It replaces one-for-one in recipes that normally call for grain-based flours, and it has a nice texture, isn’t too dry, and has a neutral flavor profile.

Coconut flour has a more distinct taste and texture, requiring more eggs to flour to produce the right texture. On the plus side, it’s higher in fiber and lower in carbs per serving. It doesn’t replace as easily as almond flour though, swapping out grain-based flours in a ¼ cup coconut flour to 1 cup all-purpose flour ratio. It will also increase the requirement for eggs to help the ultra-dense flour bind together.

If you’re new to baking with coconut flour, it’s best to use a recipe written for it, instead of swapping ingredients.

Per cup, coconut flour has 14 grams of fat, 76 grams of carbohydrates, 55 grams of fiber, and 27 grams of protein.

Flax meal is made from ground flax seeds and is grittier than almond flour but fluffier than coconut flour.

The taste profile is similar to almond. Per cup, flax meal has 40 grams of fat, 44 grams of carbs, 35 grams of fiber, and 26 grams of protein.

Made from the husk of the oat, oat fiber is not the same thing as oat flour. Oat fiber is pure fiber, whereas oat flour is ground oats and is relatively high in carbohydrates.

Oat fiber is darker and denser than oat flour, but has a neutral taste. Because it is pure fiber and not flour, it doesn’t compare in per-cup measurements. Per serving, which is 1 teaspoon, it contains 0 grams of fat, 3 grams of carbohydrates, 3 grams of fiber, and 0 grams of protein.

Do You Bake With Keto Flours?

Let us know your favorite keto flour and how you like to incorporate it into your diet. Make sure to follow us on social media, where post tons of delicious recipes, including those using keto flour!