Why You Need Fat-Soluble Vitamins 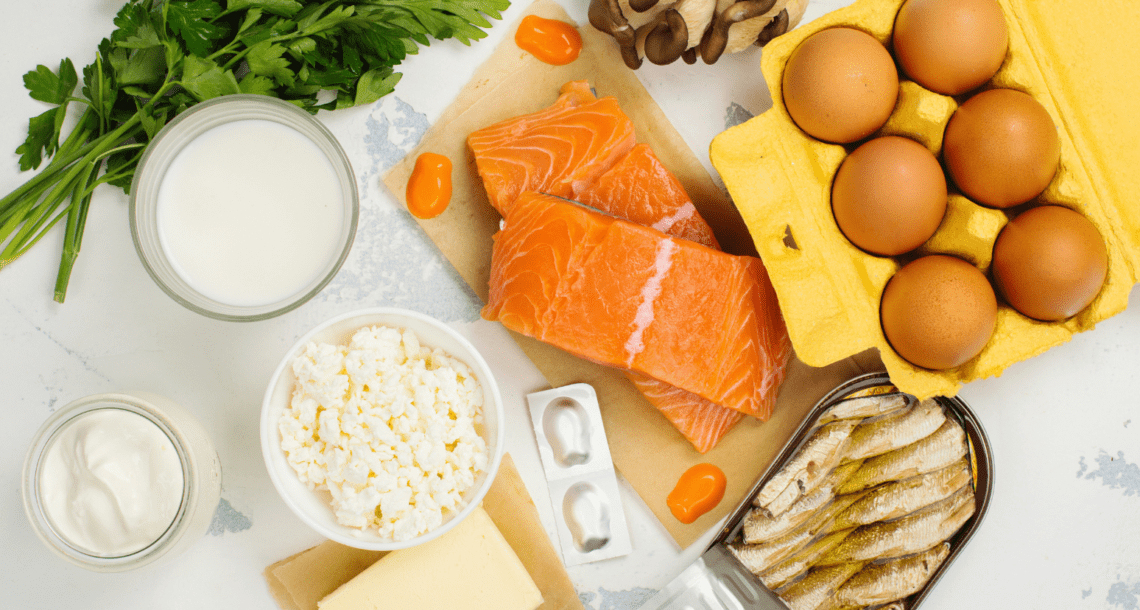 What Are Fat-Soluble Vitamins?

The four fat-soluble vitamins are A, D, E, and K.

Let’s look into the health benefits, functions, keto food sources, and signs of deficiency of these four vitamins.

The group of vitamin A fat-soluble compounds is collectively called retinoids. Retinol is the most prevalent dietary form of vitamin A. Vitamin A2 (3,4-dehydroretinal) is an alternative and less active type of vitamin A present in freshwater fish. Other forms are in the body but absent or rarely found in foods. [1]

Benefits of Vitamin A

Vitamin A is an important vitamin when it comes to maintaining your vision and forming tear fluid. You’d actually go blind without it! Vitamin A is an immune system booster that’s also necessary for cell growth, including hair growth. [2] [3] [4]

Vitamin A is vital for fertility and fetal development. [5]

Keto Food Sources of Vitamin A

Animal products such as the following are the only direct sources of vitamin A:

Your body can also derive vitamin A from certain carotenoid antioxidants in plants (provitamin A). Beta-carotene is the most efficient of these, and is found in higher amounts in veggies like kale, spinach, and carrots. [6] [7]

Keep in mind that, depending on factors like genetics, provitamin A isn’t always efficiently converted into retinol, which is the active form of vitamin A. Those on a vegan diet or a diet lacking in meat, fat, and vegetables could be at risk of vitamin A deficiency. [8]

Symptoms of Vitamin A Deficiency

Symptoms of a vitamin A deficiency include dry eyes, hair loss, and poor immune function. [9]

Symptoms of Vitamin A Toxicity

Like most things in your body, balance is needed. Overdosing on vitamin A can lead to hypervitaminosis A, a rare but serious condition usually caused by excessive doses of vitamin A supplements or fish liver oil. A high intake of provitamin A doesn’t cause hypervitaminosis.

Symptoms of vitamin A toxicity include fatigue, headache, stomach pain, joint pain, vomiting, and blurred vision. Vitamin A can be fatal at extremely high doses. Health professionals advise staying in the safe range, which is less than 3,000 mcg of preformed vitamin A daily for adults. Children and people with liver diseases like hepatitis and cirrhosis should be more cautious with vitamin A intake and might be at an increased risk of hypervitaminosis A. With pregnant women, excess vitamin A could be harmful to the developing baby. [10]

When your skin is exposed to sunlight, your body produces vitamin D, which is also called a hormone or the sunshine vitamin. Vitamin D collectively refers to a few fat-soluble compounds.

Vitamin D is found in two dietary forms: D2 and D3. Your body converts these calciferol forms of vitamin D into the biologically active form of vitamin D or stores it for later use in the form of calcidiol. The body typically converts vitamin D3 more efficiently into calcitriol than vitamin D2, and some health experts believe vitamin D3 is superior to vitamin D2 in terms of bioavailability and absorption. [11]

Vitamin D2 (ergocalciferol) is present in mushrooms and certain plants.

Vitamin D is involved with numerous functions in your body, such as maintaining bone health and strengthening your immune system. Vitamin D regulates circulating levels of phosphorus and calcium, which are key minerals for bone growth and maintenance. Low vitamin D levels have been associated with various conditions and infections, including viral infections. [12] [13]

If you’re regularly exposing large parts of your skin to sunlight, your body is producing some vitamin D on its own. Some people go fully clothed in the sun or hardly ever get out in the sun, and others use protective sunscreen, which reduces the amount of vitamin D produced by the skin. [14]

Vitamin D deficiency can lead to weak muscles, soft bones, and a heightened risk of fractures. The condition is known as rickets in children and osteomalacia in adults. [15]

Some of the symptoms of vitamin D deficiency are hair loss, depression, impaired wound healing, and fatigue. Low vitamin D levels and deficiency have also been associated with an increased risk of heart attacks and cancer fatality. [16]

If you don’t go out in the sun much or eat salmon or fish liver oil, taking vitamin D supplements has been shown to promote longevity, particularly in older adults in care facilities or those who are hospitalized. Supplements might reduce the risk of respiratory tract infections. [17] [18]

The general recommendation is to avoid going over the upper limit of 4,000 IU daily for adults. Some people take vitamin D therapeutically at higher doses under doctor supervision while monitoring their calcium intake and calcium levels to avoid hypercalcemia.

It’s best to visit your doctor if you’d like to check your vitamin D levels and discuss supplementation or diet changes.

Vitamin E is a powerful antioxidant that helps prevent aging and protects fatty acids in your cell membranes from harmful free radicals. Most of the vitamin E in the blood is the alpha-tocopherol type. In high amounts, vitamin E acts as a blood thinner, decreasing the blood’s clotting ability. [19] [20]

Nuts and seeds, avocados, fatty fish, and fish liver oil are among the richest food sources of vitamin E. The recommended daily intake (RDI) of vitamin E for adults is 15 mg. [21]

It’s difficult to overdose on natural dietary sources of vitamin E, but cases have been reported after people have taken especially high doses of supplements. Overdosing on vitamin E appears to be less harmful than overdosing on vitamins A and D, but medical attention might still be necessary.

K1 and K2 are the two main types of vitamin K. Vitamin K is involved in blood clotting, supporting bone health, and preventing the calcification of blood vessels, which could reduce the risk of heart disease. [25]

Vitamin K1: Phylloquinone is the main form of vitamin K in the diet, found in plant sources. [26]

Vitamin K supplements could decrease bone loss and the risk of bone fractures. Supplementation has also been shown to slightly increase the survival of those with liver cancer. [28]

Observational studies conclude that a high intake of vitamin K2 could lower heart disease risk, but evidence from controlled studies is inconclusive. [29]

Leafy greens and veggies like parsley, kale, and Brussels sprouts contain the highest amounts of vitamin K1. As well as soy foods like natto, vitamin K2 is present in small amounts in some high-fat, keto-friendly animal foods like butter, egg yolks, and liver.

Symptoms of vitamin K deficiency include easy bleeding and bruising. Low levels of vitamin K have been associated with an increased risk of fractures in women and reduced bone density. [30]

Vitamin K isn’t stored in your body in significant amounts, so consuming a diet lacking in vitamin K can lead to deficiency and weakness. People who aren’t properly digesting and absorbing dietary fats are at the greatest risk of vitamin K deficiency, including those with celiac disease, cystic fibrosis, and inflammatory bowel disease. [31]

Natural forms of vitamin K have no discovered symptoms of toxicity, so scientists haven’t established an upper intake level for vitamin K. More studies are needed. A synthetic form of vitamin K (menadione or vitamin K3) could have adverse effects when taken in large amounts. [33]