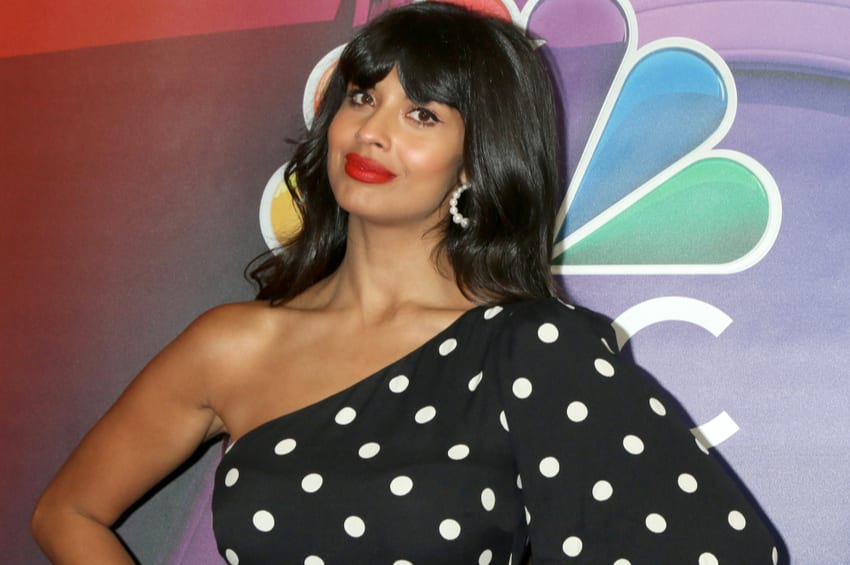 To be honest, I’ll start by saying I have had a tremendous amount of respect for you, Jameela Jamil. You are bringing awareness to the downsides of diet culture, encouraging body positivity, and advocating for female and racial inclusivity – all things I agree with.  However, you recently made a post asking celebrities and influencers to “stop pushing the keto diet to people who do not need to follow this for medical reasons.”

You should have asked your co-star in Marry Me – Jennifer Lopez – as she was a big fan of a low-carb approach.

Anyway, though people have been writing me asking me to make videos ripping your post apart and tearing it down, that’s not what I’m about.  As the title mentions, I strongly believe you are misinformed.  And with someone with a big platform and audience, I feel it is your obligation to become informed and disseminate information appropriately.

Jameela Jamil, your post is very emotional as it is a topic that is certainly near and dear to your heart and I can appreciate the care for your followers, particularly women, from these predatory behaviors by certain people/companies.

In fact, I exposed one of the largest ones here and continue to be one of the biggest voices on why Keto pills are one of the biggest scams on the planet.    That being said, I’ll address your concerns with scientific rationale as I’m someone who “has read nearly every medical journal” on this topic.

So, let’s get started:

While this statement is semi-correct, it’s lacking content.  It is true that certain cells in our bodies require glucose to function.  For example, red blood cells need glucose, meanwhile, almost every other cell in the body can function perfectly fine (and likely better) on ketones.  To give you a further depiction of this, infusing the heart with ketones made it 28% more efficient than infusing it with glucose.

Further, while your statement that most humans need glucose is correct, it’s important to understand there is no such thing as an “essential” carbohydrate.  The reason for this is our bodies are incredible machines that can utilize a process known as gluconeogenesis or the formation of glucose from non-carbohydrate sources.

And no, this doesn’t mean your body will instantly start breaking down protein/muscle for these sources.  In fact, studies show that people who are keto-adapted have the same amount of muscle glycogen as those eating a high carbohydrate diet!  How?!

We should look no further than some of the most elite athletes in the world, Alaskan sled dogs.  Dogs running 160 km/day for 5 days showed no cumulative muscle glycogen depletion despite eating a diet consisting of only 15% carbohydrate.

Similarly, humans who are keto adapted go through a process known as gluconeogenesis likely from lactate and glycerol.  In fact, our lab alongside our colleague Dr. Mike Roberts showed in keto-adapted animals, BCAA levels were no different from their high carb counterparts, however, alanine (a non-essential, glucogenic amino acid) was also likely used for gluconeogenesis.

Thus, your statement that humans need glucose is correct.  In order to function optimally, our body does a great job at making them on their own (plus you still eat plenty of fibrous carbohydrates on a well-formulated ketogenic diet).

2) The Ketogenic Diet Should Only Be Used for Medical Purposes

I’d be happy to send you a copy of our book, the Ketogenic Bible that has hundreds of references regarding these alone.

And here are areas beyond those listed above that are more “generalized”:

So yes, while you should be medically monitored when using ketosis therapeutically, the benefits and applications extend FAR beyond just epilepsy

Extraordinary claims require extraordinary evidence – and screenshots from followers don’t count.  I’ve yet to see data from a controlled study implementing a well-formulated ketogenic diet showing detrimental impacts on vital organs.  In fact, I’ll site a couple of quick studies in children nor adults. Actually, I take that back, there is a VERY important organ that is affected by a well-formulated ketogenic diet – adipose tissue.

In fact, I’ll site this quote from the authors of a study investigating women with breast cancer “results suggested that chemotherapy combined with KDs can improve the biochemical parameters, body composition, and overall survival with no substantial side effects in patients with breast cancer.”

Thus, your argument that keto is detrimental for your organs is false – minus fat tissue.

4) Keto Is Not Sustainable

I’ve been living a ketogenic lifestyle for nearly a decade.  But anecdotes aren’t worth the paper they are written on right?!  So what does science say?

Quite simply, adherence to a low carb diet has been shown to be consistently higher than a low-fat diet in research studies. 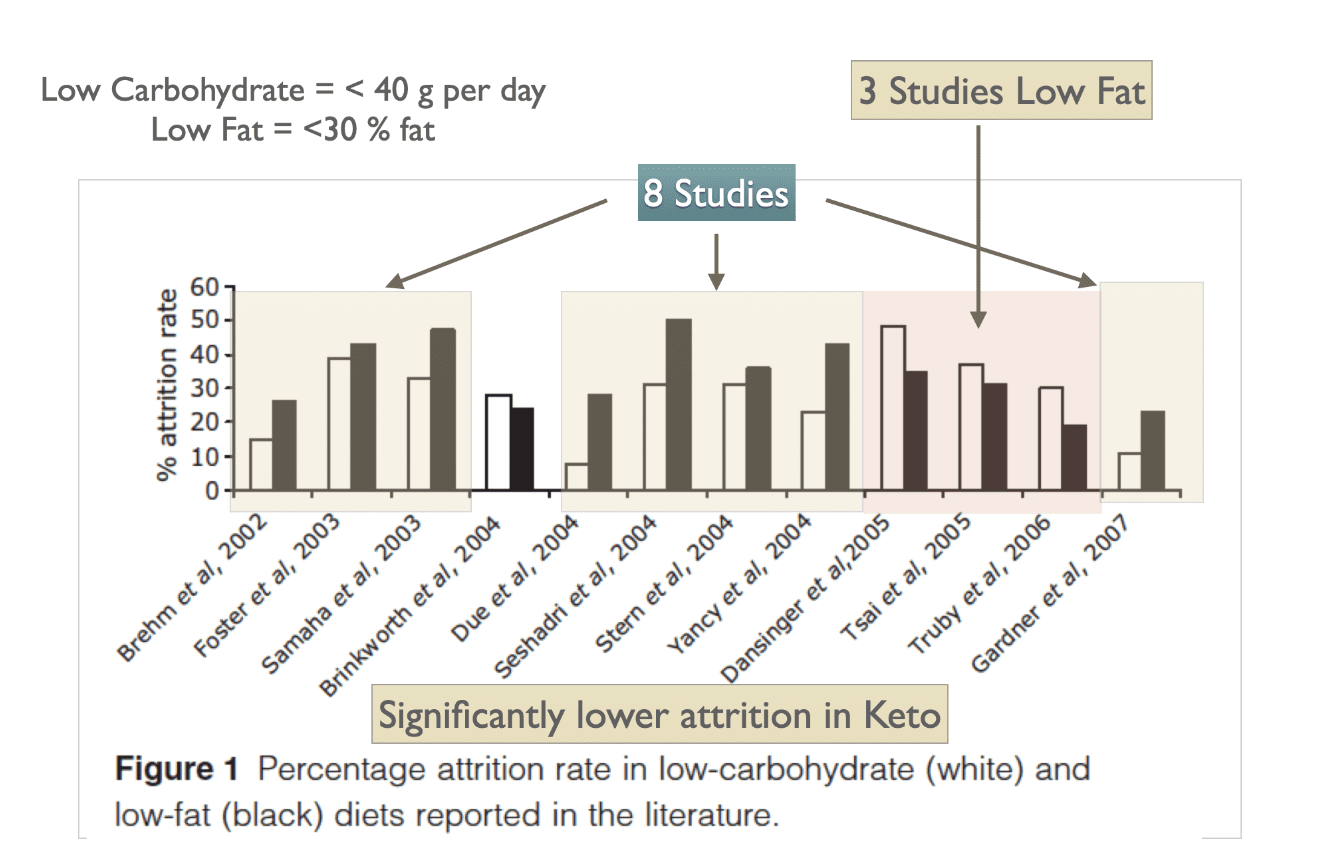 While any type of nutritional program takes active work, due to the satiating effects of ketosis, it appears that a LCHF approach is one of the most sustainable long terms.

While you might be alluding to some of the symptoms of keto-adaptation, there is no conclusive data that keto has a negative impact on brain function – in fact, quite the opposite.

Though some studies feeding extremely high-fat diets to animals (90% fat diets for a month) show some impairments, most well-formulated ketogenic diet studies show the opposite. One could make the argument that it wasn’t even ketosis causing the differences in cognitive function but rather the protein deficiency (the study cited below compared a 24% protein diet from standard show to a 9% KD).  Not comparing avocadoes to avocadoes.

Further studies show that feeding a ketogenic diet prevented memory decline along with other lifespan effects.  As one of the researchers points out, “In addition, due to its neuroprotective capacity, the KD may also hold potential benefit for the treatment of other neurological or neurodegenerative disorders.”

If ketosis slowed brain function, why would there be an active interest in utilizing it as a therapy for Alzheimer’s?!

As Sam Henderson mentions in his review: “Much of the benefit of ketone bodies can be attributed to their ability to increase mitochondrial efficiency and supplement the brain’s normal reliance on glucose. Research into the therapeutic potential of KB and ketosis represents a promising new area of AD research.”

For the sake of time, I’ll summarize this simply – more and more people are suffering from Type 3 Diabetes.  At this point, ketosis may be one of the MOST POWERFUL tools for the brain.

Further, I understand your passion for helping people overcome eating disorders and create bad behaviors when it comes to food.  The Hippocratic Oath –  First do no harm – is important to keep in mind that if you have something as powerful as ketosis, yet eating this way creates eating disorders, then it surely wouldn’t be ideal.  However, I’d like to point you in the direction of some studies showing the opposite:

“Patients reported significant reductions in binge eating episodes and food addiction symptoms including cravings and lack of control as measured by the Binge-Eating Scale, Yale Food Addiction Scale, or Yale-Brown Obsessive-Compulsive Scale Modified for Binge Eating, depending on the case. Additionally, the patients lost a range of 10–24% of their body weight. Participants reported maintenance of treatment gains (with respect to weight, binge eating, and food addiction symptoms) to date of up to 9–17?months after initiation and continued adherence to the diet.”

“After 3 months on the KD, the patient reported she was “30-40% better.”  When combined with ketamine infusions, this patient with severe chronic AN of 15 years –resulted in a surprising and long-lasting complete remission.

“This diet, known as a ketogenic diet (KGD) mimics starvation, thus allowing the patient to experience the anxiolytic state of ketosis, and yet avoid the morbidity of starvation.”

Lastly, I truly appreciate what you do for women in particular with body positivity, and hope this helps your audience feel more confident in their nutrition journey as it has for the countless other women who have been successful in living a ketogenic lifestyle.

I’m available for further discussion at any time and hope this helps bring clarity to your thoughts – rlowery@ketogenic.com